DirectX SDK (DirectX Software Development Kit) June 2010 is a bundle of applications developed by Microsoft in June 2010. It contains DirectX Runtime and all DirectX programs required to create DirectX-compliant applications. offline installer. Additionally, DirectX technologies are now widely integrated with Windows platforms and it is now a fundamental part of Windows

You can download DirectX SDK June 2010 offline installer for Windows 10, 8, and 7, XP 32, and 64-bit computers. It’s an offline installer and therefore you do not need to have an internet connection to install this program on your PC after download. 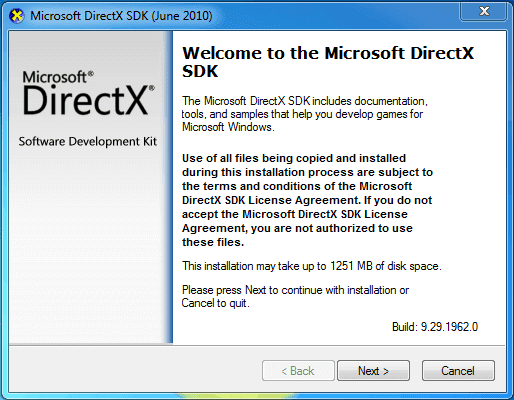 Starting with Windows 8, it is included as part of the Windows SDK.

Microsoft originally created this Software Development Kit as a high-performance platform for game development on top of Windows operating systems. As DirectX technologies matured, they became relevant to a broader range of applications. Today, the availability of Direct3D hardware in computers drives even traditional desktop applications to use graphics hardware acceleration. In parallel, DirectX technologies are more integrated with Windows. DirectX is now a fundamental part of Windows.

How to Install the DirectX SDK:

You can easily install DirectX SDK June 2010 on any Windows PC. First, download the offline installer using the download link listed below. After downloading, find the file namely DXSDK_Jun10.exe in your download folder. It is a standalone installer package that contains all the necessary files and data required to install the program. Now double-click on it to start the installation process. Then click NEXT and read & accept the software agreement. Now again click on the Next button to start the process. After a few minutes, the installation will be completed.

Technical details of the program: